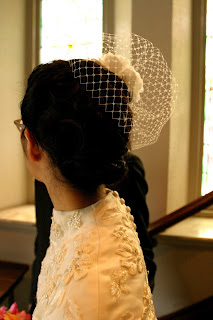 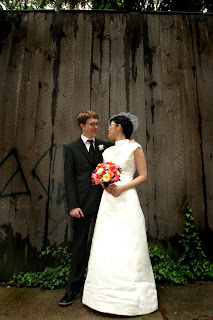 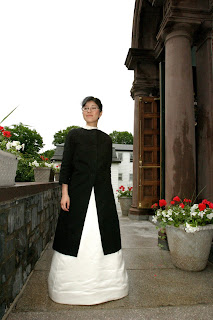 Before Etsy/blogs became a big thing, weddings were both easier (fewer options) and more difficult (fewer options) to plan. I found my birdcage veil at Bride's Head Revisited, where I paid an embarrassingly large amount of money for something that I probably could have made myself. I also bought two wedding dresses. The first was supposed to be dramatically altered based on a favorite dress featured in Martha Stewart Weddings (my bible and telephone directory). After realizing it was impossible, I grudgingly bought a second dress. My favorite thing was our stationary, which was done by a friend of a friend. The photography was less successful. I know they're just images, but....well, these are the more successful ones. This experience convinced me to be more careful about choosing a photographer for our family photographs in 2011.

congrats on your 7 year, erica! you look fantastic in those photos.

happy anniversary! i love your headwear -- so chic.

Happy 7th anniversary--you look beautiful and stylish in these pictures.

Sorry I'm late to the game but happy post-anniversary! I love birdcage veils but had a hard time finding one for my wedding. You dress is so lovely.

Ugh, I am so behind on my blog reading but must add to the congratulations and say that I ADORE your dress. The veil sets it off perfectly. The whole look is so different from the typical strapless princess thing and really, really suits you. <3