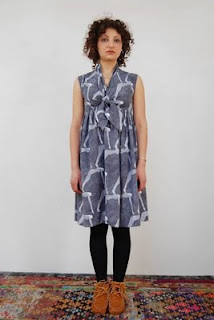 i love this print, it's so witty and subtle at the same time.

i've always looked askance at jumpsuit and rompers, but i like how the print really gives it structure and a tough uniform-like feel.

a new dress for the end of summer 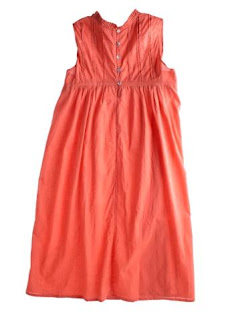 one of my favorite shades of coral. it'll arrive just in time for labor day barbecues and will layer well with a cardigan and jeans later on.

UPDATE.
so apparently the buttons go down the back of the dress, but when i tried it on, it didn't seem to matter which way. so i'm going to take the label off and wear the buttons in front. also, the fabric is pretty thin and somewhat sheer. i need to have it taken in on the sides (a small would have fit better), and also shortened. it goes just past the knees, and i'd rather have it 3-4 inches above the knees so that it looks better with jeans and leggings. overall, though, it's a pretty dress with lots of nice details. the fabric and color do not disappoint.
Posted by erica at 9:47 PM 12 comments: Links to this post 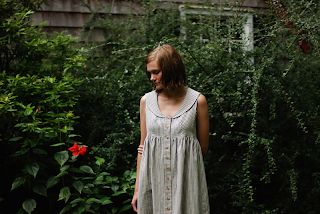 jenny must have read my mind because those buttons down the front are just what i need right now. plus, that rounded collar, the striped fabric, it's too much. i cannot wait to see what else is in store for her fall collection. and elly makes a lovely model.
Posted by erica at 5:50 PM 2 comments: Links to this post 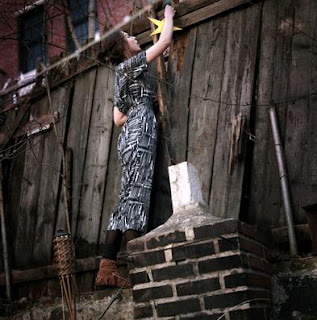 jenny's and stephanie's posts on ankle boots has got me thinking about my wish list for fall. it'll be interesting to see which pieces i'll spring for now and which i'll wait for winter sales to purchase. i'm in the preliminary stages of drawing up a clothing budget. wish me luck!

first off.
things that really can't be on my list:
coats
tall boots

i say the same thing every year. let's hope i can exercise more self-control this season (examples of last year's failures). 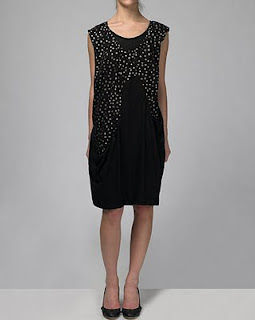 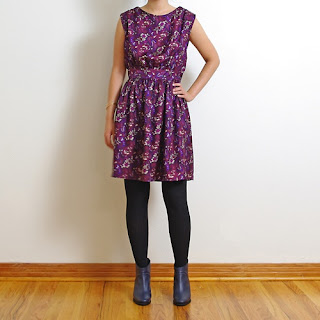 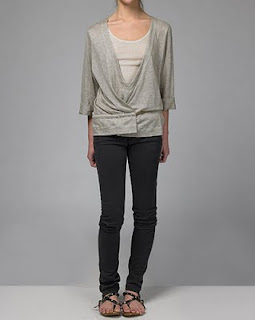 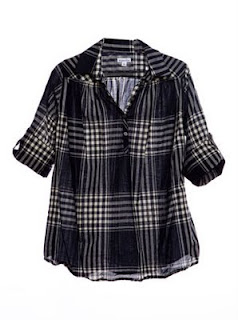 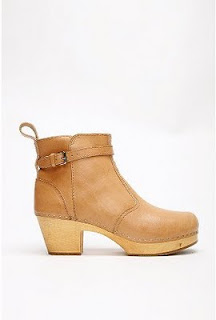 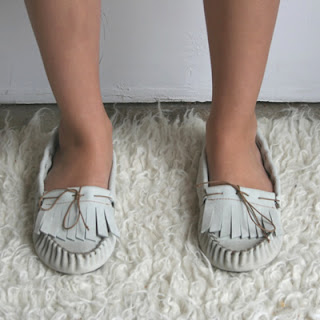 4. will buy almost anything from

i'm looking for a charm necklace with the initial 'L.' something a bit off-beat, a little rough around the edges, but still substantial enough for every day wear. i haven't found anything suitable yet, but this will definitely be a big-ticket item. i wonder if hannah clark could make me something.
Posted by erica at 10:30 PM 12 comments: Links to this post

although i am now a current elliott fan, i can't help but admire people who tough it out in raw denim. i noticed that apc is now selling pre-distressed denim, but the beauty of apc denim for me has always been how they become an index of your recent past.

here are the past four years of matthew's life, as witnessed by his new standards. 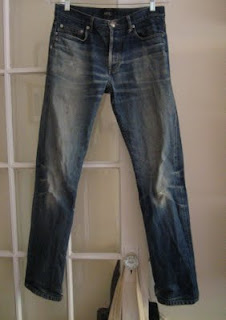 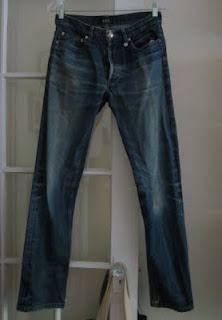 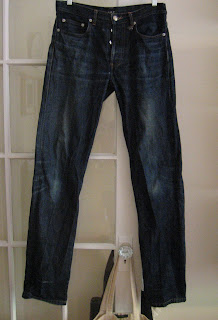 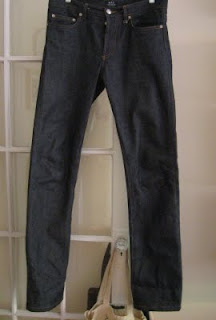 Posted by erica at 3:57 PM 5 comments: Links to this post

thank you anabela for articulating something that i have been thinking about for a long while now. the main thing that i have been struggling with all summer is my desire to keep buying clothing that has no business being in my closet. my problem is that i bypass the designer collaborations at urban outfitters, target, h&m for the pricey stuff (handmade or otherwise). and instead of buying just one or two key pieces, i buy more than i should.

i created laws of general economy in order to both share what i have and to remind myself to be more cautious when buying. it's a step in the right direction for me. at the end of the day, though, i can't bring myself to stop blogging because i have met so many wonderful people through it. and for me, fashion and getting dressed everyday is a leap of faith, a reminder that play is still a vital activity for us all.
Posted by erica at 3:03 PM 4 comments: Links to this post 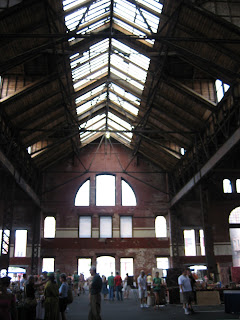 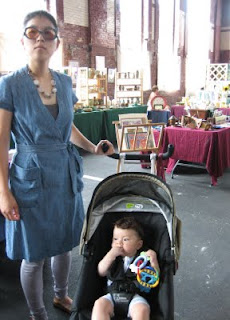 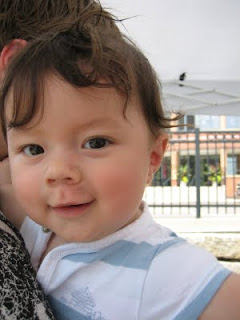 i wore my new apc chambray wrap dress to the Sowa (south end-ish) antique market on sunday. it's supposed to get into the 90s today. maybe i should fill the bathtub with cold water and sit there with leon all day.

also worn:
park vogel leggings on super sale
new necklace by simplyolive
Posted by erica at 10:05 AM 11 comments: Links to this post

fall inspiration from the little ones 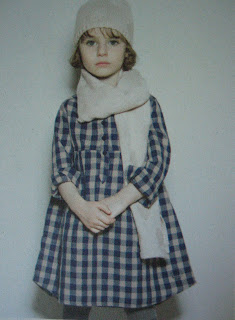 it's like isabel marant re-imagined for little girls. i wouldn't mind wearing this, and who knows, maybe i'll find something similar available this autumn. i also love her bob. if only i had the guts to cut my hair short again.
Posted by erica at 3:54 PM 6 comments: Links to this post 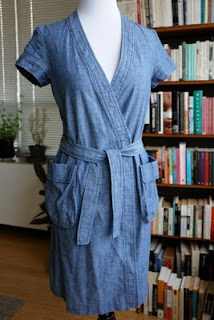 
tien-ann, who has been posting loads of amazing pieces to laws of general economy, notified me that i won her apc chambray wrap dress. i had been trying to track this down on ebay for years, so i am thrilled that i found it on the clothing blog. i think it'll be perfect for breastfeeding. paired with a chunky long cardigan and boots, it will also work this autumn.
Posted by erica at 3:48 PM 5 comments: Links to this post 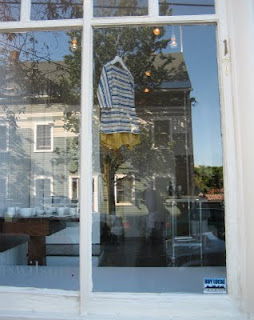 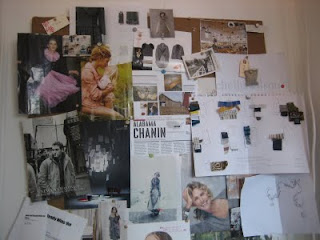 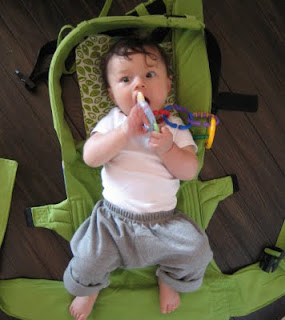 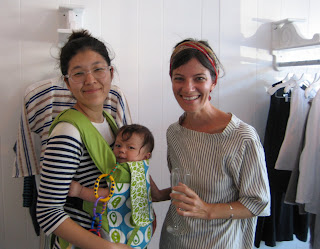 leon and i drove up to portland on friday to see lisa and her lovely clothing at a new shop, chelliswilson. i tried on the yellow striped silk shorts (hanging in the window), which were so adorable. leon enjoyed hanging out on the dressing room floor.
Posted by erica at 1:07 PM 11 comments: Links to this post 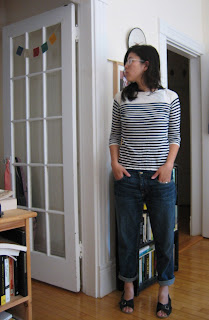 so if you're planning on buying a pair of current elliott boyfriends and don't want to wear a belt at all times for fear of them falling down, i would highly recommend that you order 2-3 sizes down. mine are a 26, and i usually wear a belt with them. my next pair will probably be 25s even though my regular denim size is a 27/28.

they are by far the most comfortable pair of denim that i've owned. the fabric is so soft and slouchy, and it feels like i'm wearing a pair of sweatpants. i really like them with my worishofer slingback wedges, which are the only high-heeled shoes that i can manage to walk in.

there's an art walk in portland, me, today. lisa of lebouton studio will be at chelliswilson. leon and i are heading out after lunch. 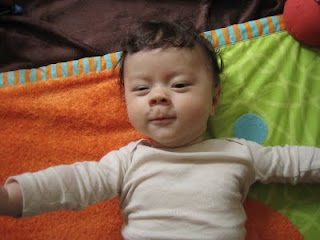 Posted by erica at 9:22 AM 7 comments: Links to this post 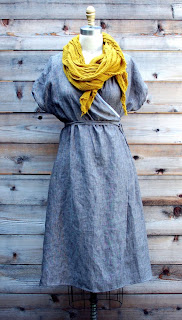 martha is having a shop update this wednesday around 10 am. unfortunately leon and i will be in middlebury, vt, visiting friends. i think this wrap dress would be perfect for nursing. i love the kimono sleeves and pinstripes. you could wear it with leggings and a loose cardigan for fall, too. her gossamer scarves are pretty amazing, too.
Posted by erica at 1:55 PM 6 comments: Links to this post 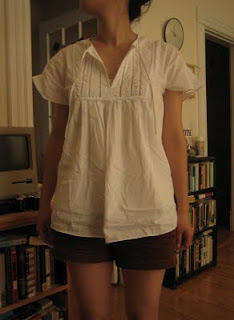 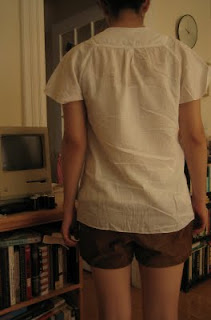 a few months ago a friend of mine was wearing this top from madewell. i didn't realize they had opened a store on newbury st. when we were in nyc at the end of june, we hung out with jenny, who was wearing a cute tunic dress from madewell. i chided myself for not going into boston to check out the store. finally yesterday i went and found this white top on sale for $20, plus 40% off for a grand total of $6.99.

i think i should go back and buy a few more.
Posted by erica at 10:18 AM 8 comments: Links to this post