the things i do for my cats 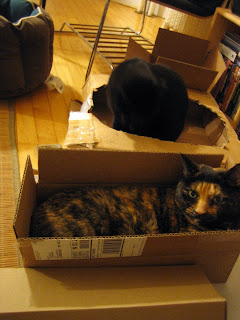 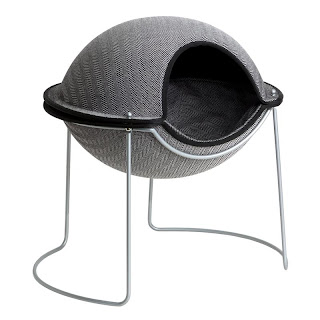 i know, the economy is going to hell and we have some major expenses to deal with, but 25% off the new hepper pod bed in herringbone (removable reversible liner, hooray!) was incentive enough to buy something that i had been planning on getting for quite a while.

right now our house is filled with 6 cardboard boxes in which turtle and hector take turns sleeping. i don't have the heart to toss them just yet, but they're turning our apartment into a junkyard. hopefully this pod bed will be so enticing that they won't feel the need to hop into the crib come february. oh, i'm probably being delusional, but at least the apartment will look nicer.
Posted by erica at 7:02 PM

Those are so awesome (I love the herringbone one best!). I would love to buy something like that for Oreo, but my cat is a flake. She changes her favourite spot every week, and once she's exhausted one, never goes back. I would probably scoop her up and put her in the pod by force ("I spent a lot of money on this! Enjoy yourself in there, doggone it!"). Then I would feel guilty.

i can't decide if my cats are flakes, they definitely love boxes and the bed. maybe i'll pretend that the pod isn't for them, and then they'll be contrary and decide that it's their favorite spot. we'll see...

I love it! There's always great excitement at our place when there's a new cardboard box but I agree, all that cardboard is a hassle. ps I've been reading your blog for awhile now and I always really enjoy it :)

ooohhh i love cats. they look like they're having fun. my old cat loved paper bags. if one was lying on the ground he would crawl inside and i carried him around in it. He also liked towels on the floor. he would lie on it and we dragged him around. those pods are sooo cool. i wish they made them human sized.

i do hope they start using those pods! it's terribly cute and 100x better than cardboard boxes lying around. i know cos my cats love to ambush each other in the boxes. whatever i buy for them to sleep in, they don't use - and now they took over my computer chair!!

That's the most stylish cat bed I have ever seen (in my entire life). I'm showing my sister! It does feel good to spoil others, including our furry friends. Turtle and Hector are very lucky to have you as their mum.

Oh, and Anabela, our cat is the same. He goes here one week, there the next. Very much a transient, hobo cat. He doesn't have a pod though...

I love the cat bed--it looks both stylish and fun for your kitties. My pair love boxes (especially Blue), but in a small apartment it can look pretty ugly. I hope they love it--I love that you are thinking of them even with a baby on the horizon.

SO cute. i love this:) our old cats used to sleep on our bed--so much cat hair, ew!

That is one stylish cat house!