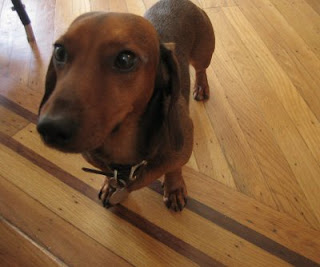 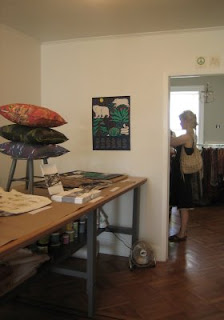 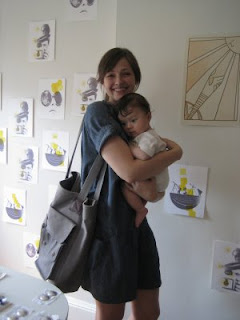 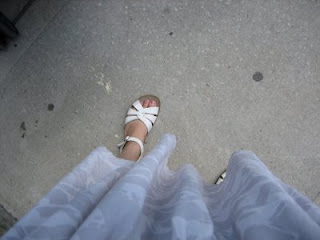 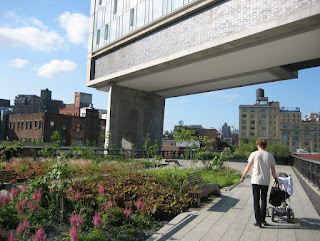 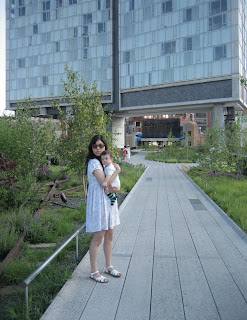 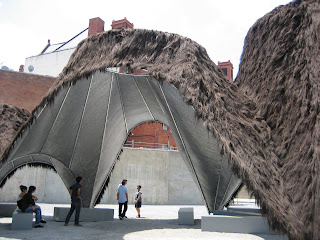 this past weekend leon met gus and lena. and then he met valerie and her soon-to-arrive little sprout. he played with jenny, too, and decided he wanted to move to brooklyn soon. i bought my mociun issaran dress, which is so soft and easy to wear. we went to the guggenheim, ps1, and the whitney. leon highly recommends 'afterparty' (a.k.a. woolly mammoths) at ps1 and the dan graham exhibit at the whitney (mirrors and crazy funny films). we walked along diller + scofidio's high line and wondered why boston wasn't able to do something similar with the central artery. there were a few epic meltdowns along the way. staying at the ace made the trip manageable. we stuffed ourselves in koreatown and wished we could have bought even more things at the sale (those corwin+mociun pillows!). and then we took the train home and plotted our next nyc trip. maybe in august for the summer sales.
Posted by erica at 9:54 AM

why can't I find a cool guy like leon who has the same interests as me?! (p.s. liking the white saltwaters...)

romaine said...
This comment has been removed by the author.
11:56 AM

erica! it was so great to meet you and leon and matthew. it looks like you had a great trip. and maybe leon's on to something with that brooklyn move idea...?

sounds like a really fun trip! so happy for you that you found the dress, looks very comfy and cute on you.

wow, love these pics. the dress you got looks beautiful on you--really suits you. it's great with the white sandals.

the high line looks so fun! i have to go check it out. and i'm not usually one for star wars references, but the "afterparty" looks like chewbacca. it looks pretty neat too though, and i want to see it in person.

please come back in august!!

Meltdowns or no ... it looks pretty near perfect. I wish I was there!

lovely pictures...especially the second to last one with you and leon (feels like antonioni)...:)

oh -I so wish I could have gone to that sale. it looks like it was wonderful.
and the high line! I entered that competition:)
soon we'll go to see it....
xo

How fun!
I wish I could have joined all of you!
I have a couple of friends that live in the apartments near/at the Highline, but I haven't been able to visit yet. Hopefully I'll be able to go in the fall when my husband will be having an art opening at CRG Gallery.

I didn't know you got the Issaran Dress, too- it looks really pretty on you...isn't it comfy?
xo

I am so sorry we didn't get to meet up--but hopefully in August. It looks like a great trip and a great sale--and you look amazing in your dress. I can't believe you had a baby just a few months ago.

I'm so glad you had a great weekend--and it would be great if you could move to Brooklyn (not like we academics have that much choice in where we live, however!).

I was at Lena's sale too, but there were no handsome babies on the premises, so our paths must not have crossed...

the weather looked amazing! I am jealous you went to the highline, its the one thing that I miss about moving away (that and mayle). This time next year Leon will be even wilder when you take him to NY! If you dont mind me asking how much was teh Ace charging for rooms?

it was so nice to see you guys! i love the gus photo... hee hee.

i washed my issaran dress yesterday and accidentally dried it too. it shrunk several inches in length- changing it from a dress to more of a tunic. darn! just wanted to let you know...

rachel-
we were there on the early side, i think we left at 3 or so. too bad we missed each other!

lena-
good to know! i will be sure to hang-dry the dress, it's short enough as it is.

marti-
our room was $160 plus taxes for a cheap queen, which was bumped up to a standard full. i'm sorry i didn't have time to go to lyell.

moya-
if only we had any say in where we lived! i could do brooklyn, i think.

Leon has new many friends! Being that adorable must be hard for anyone to resist! Your New York trip looks like it was fun. I love the pictures!

look at that Leon! what a gorgeous face!!!

so fun. and how cute is your little one!

so cute! they must have adored him. how fun that you stayed at the ace; i love love love that place. xoxo

you two are so cute!